Amira Gray snapped some pictures of our family recently, and I am just in love with them! Kudos to her — Owen acted up the entire first half of our session, and Jack was a little snarky the second half. They still turned out fantastic and I am so glad she was able to capture our family. We included Amelia by using a giant pink balloon. :)

Here are some of my favorites: 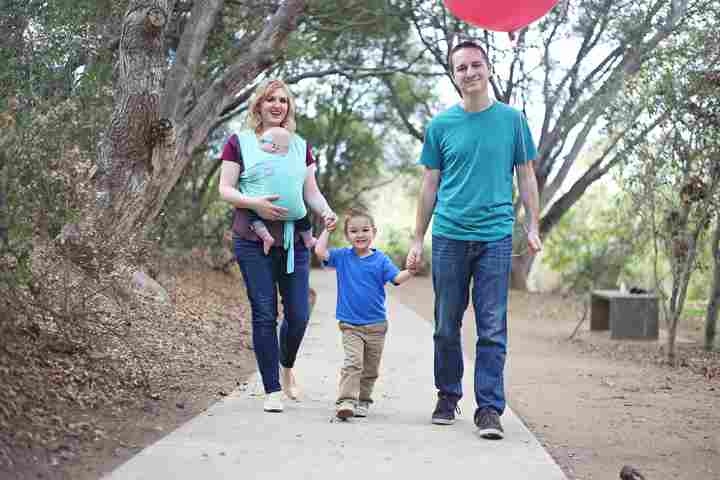 Amelia, meet your little brother Owen. Owen, meet your sister Amelia. Oh wait, you’ve already met her before you were born, haven’t you?

Over the Thanksgiving break, we traveled to Sacramento. On the way home, we made a detour through the Bay Area and stopped by to see baby Amelia. We brought her seashells and seaweed from our beach, and a succulent instead of flowers, because that’s all that I can seem to keep alive in our new house. ;)

It’s a weird feeling, bringing your new baby to visit your dead baby. I don’t know if it’s bittersweet or happy or what. But I realized that it isn’t as painful to visit her when I have a new babe in my arms. It broke me a little when I was newly pregnant and leaving her to move to San Diego last year, but now that Owen is here that pain has subsided. I don’t wish she were here instead of Owen anymore. I didn’t go to the cemetery with the same family she left us with. I haven’t forgotten her, but we’ve learned to live life without her. 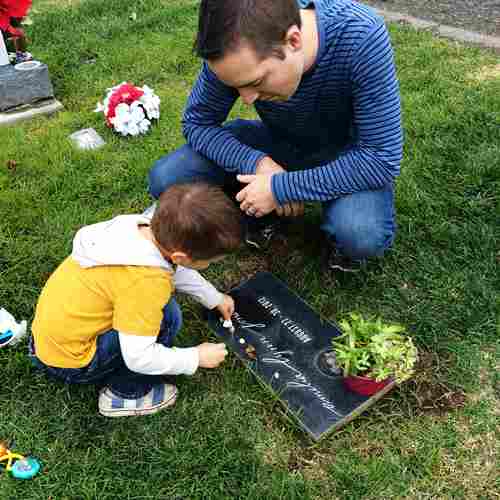 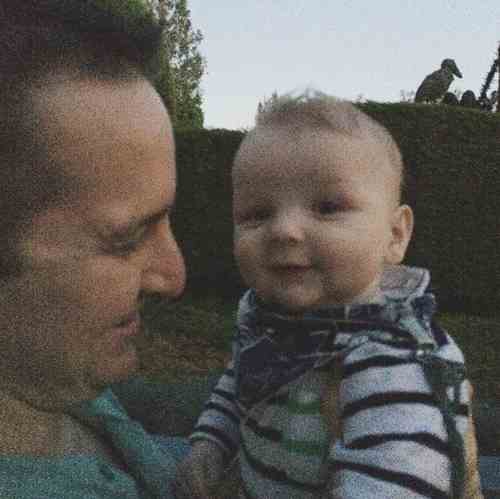 We asked Jack if he wanted toys for his birthday, or a trip to Disneyland. There wasn’t a doubt in that boy’s mind that he’d rather go to Disneyland! I love that my family usually chooses experiences over gifts, because that’s where the memories are made. :)

Our trip started out pretty rough, with lots of tears from baby Owen. Owen’s albinism means two things: first, the sun is bright and blinding for his sensitive eyes, and he really just hates being outside because of it. And secondly, he’s higher-risk for skin cancer because he has so little melanin in his skin (which means it doesn’t process sunlight like our skin does). So keeping him covered and out of the sun is really important. Have you tried keeping a hat AND sunglasses on a five month old baby?! Ha. We have a sun cover for the entire stroller, but it isn’t enough to fool the kid. I kept him in the Ergo baby carrier for some naps, but he really just struggled and fought us most of the morning and early afternoon.

One thing that made our experience much better was that Disneyland caters surprisingly well to disabilities, and albinism is no exception. By going to City Hall, we were able to get a pass that let us either skip the line, go in through the fast pass line (even if we didn’t have one), or be brought to wait in line inside instead. This made things so much easier with Owen! We kept him covered from head to toe, but it’s still so hard to keep him out of the sun. And even in the shade and overcast days there are harmful UV rays, so we really wanted to spend as much time inside as possible. We didn’t use it for all rides, but it definitely came in handy to help us keep Owen out of the sun.

And around dusk, we boarded “It’s A Small World” (decorated for the holidays!) and little Owen just lit up. He became the baby we all know and love! He squealed and smiled at the lights and music, and really enjoyed the rest of the night. It made me cry — I just love this little boy of mine so much and it pains me that he misses out on so much right now. But it also makes me extra joyful when he is able to enjoy the world around him. This kid is already teaching me so much. :)

Happy Birthday, Jack! (A little belated, as his birthday was November 2.) Jack is FOUR now, can you believe it? They say it goes so quickly, and in some ways they’re absolutely right.

If you know Jack personally, you know he has only the best intentions. He wants to please everyone around him and his biggest concern is having fun! He is loving and kind and obedient. He always tries to make life happy for all of us, and always has the biggest smile on his face. His laughter is something that if you’ve heard it before, you can hear it in your head when you see a picture of him.

Oh Jack, how I love you so.

His speech is coming along really great! He was recently evaluated by his speech teacher to speak (legible to everyone else) 5-6 word sentences! This is HUGE for us — just a year ago we were still trying to get him to say words like “ball” and “car”. He said basic sentences (the same rehearsed ones) like “I yuh you, Mom.” and “I see Anson baby! Baby happy!” And today, a year later, he’s able to say funny things like, “There was a dinosaur in my room. The shadow right there is a dinosaur! Do you see the little dots on the wall? That’s a happy dinosaur. We need to pray to make the dinosaurs go away.” We’re still working on past-tense and present-tense (he tends to say things like “I did play on the slide at preschool today!” and “I did color with Miss Connie.”) but that will come in due time. Right now it’s just really exciting to have a buddy to talk to all day!

He loves to eat, just like any other boy (or kid?). His favorite food is eggs, and it’s an especially good day for him when I dye the eggs green with pureed spinach. ;) (His favorite color is green. Some kids have a favorite character, but we’re not into characters at our house. Instead, everything has to be green.) He also loves greek yogurt, and would eat a peanut butter & honey sandwich (with the “green” bread – Milton’s organic seeded bread comes in a green package) every single day for lunch if I let him. And usually I do. ;) He also really loves to juice lately! He always asks for more carrots and more kale. LOVE my little veggie-eater. He loves broccoli, edamame (he’s been known to eat almost half a package before we cut him off!), carrots, hummus, cantaloupe, pineapple, (sometimes) strawberries, and beans. Oatmeal is a favorite, but admittedly it makes his tummy hurt sometimes (I suspect a mild allergy to it for he and I). And just like any normal kid, he loves ice cream and brownies and all kinds of sweets. Except packaged ones – I think because I’ve never bought them, he never developed a taste for them? He hates gummy candy, fruit snacks, and fruit leather. He could eat bunny crackers all day long — they’re his special treat when Owen has an especially long doctor’s appointment or we go to Sea World. And like most kids, some meals we really have to encourage him to eat, but “take five big bites and then you can be done!” usually works. :)

He, just like most boys, loves cars and trains and airplanes. If it has an engine and wheels, he loves it. Lately he’s been REALLY imaginative, which is funny because for the first 3.5 years of his life he wasn’t at all. I was wondering if he was ever going to play pretend! He builds with his legos every day, and has quite the collection. (Forever grateful to Tyler’s old boss who gifted us their legos when their son outgrew them! They’re the favorite toy at our house and will be for many, many years to come.) He’s always building airplane-tractors and trailers and firetrucks. Lately he’s been walking around with his arms spread out and saying, “I’m an airplane! See my lights, Mommy? See the lights on my hands?”

We don’t watch much TV, but his favorite shows/movies are Chuggington and Planes: Fire & Rescue. He is also really into Little Einsteins but we don’t get that channel anymore so Mommy cut him off from watching the same 6 episodes on repeat. ;) It’s funny because most kids totally zone out in front of the TV, but Jack actually learns so much from what he watches! It’s really helped his vocabulary and has expanded his view of the world around him.

I feel like we’re in the golden stage right now where Owen isn’t mobile yet, and Jack goes to preschool twice a week, can go to the bathroom completely on his own, can take a shower/bath (almost) completely on his own, can (almost) fully get dressed by himself, and can help out around the house with chores and cooking. He can even fill up his own water cup at the fridge now. What does he need a mom for again? :)

I feel like all parents say this about their kids (and they should!) but Jack is seriously such a joy to be around. The phrase I’d characterize him with this past year is, “Oh! I have an idea!” (and spoiler alert: the idea usually involves a rope, haha!) He’s a little ball of sunshine, and now that I’ve learned what “type” he is, I find there are less tantrums and less frustration from both of us when I remember and cater to what he needs. (The book The Child Whisperer really helped me — before Jack learned how to talk, he was a type 2 sensitive child, but once he started talking he blossomed as a type 1 fun-loving child. I was so confused and didn’t know what happened to my quiet little boy! He’s still a mix of both, but is dominant type 1, which means I’ve learned that in order to get things accomplished — like picking up toys or getting dressed after bath — I need to make it fun for him. Life changer.)

What a blessing it has been to have you as the oldest child in our family, Jack. You’ve been through a lot, and still have a lot left to go through. Your siblings have needed and still need so much love and support from you, and you are more than willing to give. I love that you don’t have a mean bone in your body. You want the best for everyone — recognize what a beautiful gift that is. Love you, honeyman.

No Comments
« Previous Page — Next Page »